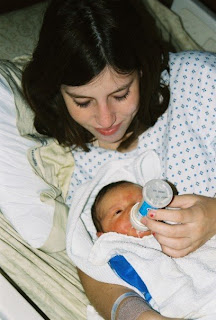 I've increasingly wanted to be more active as a birthmom for the past couple of years. When I saw BirthMom Buds was looking for bloggers, I was anxious about committing but excited about the opportunity. Since I'm new here and looking forward to providing my thoughts each week, I'd like to just introduce myself and my condensed story today.

I found out I was pregnant shortly before my 17th birthday. My boyfriend and I were both obviously shocked but actually excited to raise our child. Unfortunately, after we moved in together, our relationship turned tumultuous, depressing, abusive and impossible to salvage. We were both just very immature, selfish and divided on what we wanted out of life and out of each other.

After much thought, much prayer, and much listening to the advice of a few friends one night, I finally concluded that adoption - an option neither of us previously couldn't stomach considering - was the answer. I was seven months pregnant.

R was born on October 4, 2006 at 3:28 in the morning - on the adoptive parents' anniversary. They immediately packed up and drove through several states when they heard of his birth and before I ever officially signed the papers.

I spent three days in the hospital with him, and was able to meet not only his parents, but a set of his grandparents who just so happened to be driving through our state at the right time.

There are three sobering moments that I remember in the hospital: when the lawyers came with the papers, they referred to Baby M-- (last name). For some reason I can't explain, this evoked intense emotions and I insisted that they write the name my family had picked - Jayden Andrew (knowing his name would be R instead). I remember realizing I didn't have to sign. It comforted me knowing I had a choice. And though I lingered for a moment, I did choose to sign.

The second moment that I will never forget was on the day we left. I was in the hospital bed with R and I handed him to his mom. While she was holding him, he cried, and I remember a gut-wrenching feeling and an impulse to reach out, though I didn't. We took pictures, cried.

And the final memory was leaving the hospital with my mom. Riding away like so many other ordinary times I had been in the car with my mom. Back to life. No baby. No pregnancy. Nothing to show for anything.

If I were to write about the journey that followed, this would turn into a book. My hope is to share insights from my experience as a birthmother through my future writing here. Oftentimes, people are curious about the process before the placement, but don't realize there is a far longer and emotional, difficult, changing process that continues after. I believe it's important to shed light on this process.

I just want to conclude by saying we started with a semi-open adoption, receiving updates monthly for the first six months, then yearly until five years. However, R will turn seven in October and his mom recently added me on Facebook, initiating a transition into the "open" adoption territory. I'm sure I'll have much to share about this change of events!

I'm currently married, parenting an 18 month old son and expecting a baby girl in July. As the years have gone by and I've become more stable in my emotions regarding adoption, I've become involved with the other side of adoption, speaking to and making friends with many adoptive parents. It is my hope that we will someday be able to adopt, but for now I simply hold a special place in my heart for families who seek out those children in need. Hopefully because of this, I can write somewhat unbiased about some adoption issues and topics.