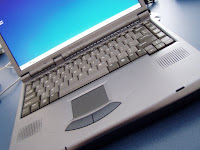 When looking at the world today, it seems like everyone is connected to everything.  It might seem completely natural for some birth families to be connected to adoptive families on social media, but for others it can feel like walking on thin ice.

When I placed my daughter for adoption, the agency that I was using advised that adoptive families and birth families not 'friend' each other on social media.  After placing, I adhered strictly to that guideline for several years.  After my daughter's Mom served as my maid of honor in my wedding in 2013, we both felt as though we had become comfortable enough with each other to engage in social media.

Then I saw them.  Every. Single. One.  I knew when she was going on vacation, I saw photos of her going to preschool, I saw pictures of her with her family.  I immediately felt a pit on my stomach.  I was barraged by their happiness and my loss.

I was committed to remaining 'friends' on social media, since I didn't want to jeopardize the openness that I had been so excited to have.  However, after several days of being barraged by photos, I chose to 'unfollow' my daughter's Mom on Facebook for quite some time.  We were able to remain friends, but I struggled with the lack of control that I had when my birth daughter would pop up on my newsfeed unexpectedly.

It took my several months to acclimate with the idea of being friends on social media once I had a taste of what it was like.  After some time, when I felt more prepared, I 'followed' my birth daughter's Mom again.  We have now been happily 'friended' for several years, with no issues.  The first few months though, our social media interactions served as a bit of a trigger for my grief, which was unexpected. 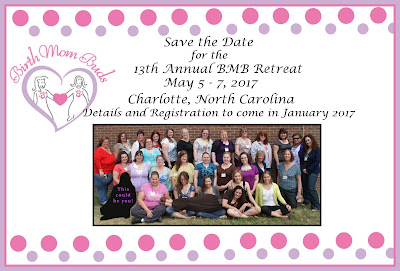 Love From His Far Away Family 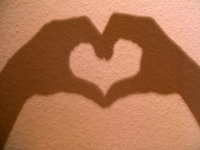 Throughout my journey through adoption, I try to incorporate my birth son into everything I do. I guess it’s my way of keeping him with me and in my heart, even if he isn’t here physically. I never want him to feel like he wasn’t loved, or that we forgot about him, and I want him to always feel as if he has a place in his far away family.
I have pictures of him in my house, and whenever my step daughter sees one, she gets excited and says his name and says “cute baby!”. I tell her that I think so too. I keep a picture of him in my binder for school, too. That way, every time I get frustrated or overwhelmed, I can remember my motivation and my strength for why I try so hard every day to be the best person I can be. Every day, I wear a bracelet that I made and put on the last day I got to see him and spend time with him. During my wedding, I pinned that bracelet to my bouquet of flowers and kept him with me that way. I also had a few pictures of him in the bridal room. I also have a necklace with his footprints engraved into it that I wear whenever I’m missing him just a little extra.


I will never be his Mom in the way that I wish I could be, and that’s just a part of my life now. But just because I can’t be there with him every day, that doesn’t mean that I can’t love him and think about him every day. We are all entitled to love and miss our children. Wherever they are, whenever the last time was that we saw them, we are entitled to how we feel about it. Whenever I’m feeling down about it, it always makes me feel better knowing that I’m doing everything I can to make sure that he will one day know how loved he always was. I always remind him in letters, that I hope he’ll read when he’s older, how lucky he is to have two families who love him so much. Adoption will never be easy, but it has taught me how to love in ways I never thought I could have before. And for that, I am grateful.

Adoption is like the weather. It's a constantly changing adventure, and you can always count on it to not be stagnant. Perhaps that's the best and worst thing about it. For some of us, we pray for a change. We beg for things to be different, or better in some way. For others, we're terrified for things to be different because we're so comfortable with how things are now.

For me, I think it’s both. I have wished for things to be better for as long as my son has been alive, but now I guess I’ve just become so used to the way things are that I’m scared of what a change would mean. I know I want more, I’ll always want more. But right now I don’t think that’s possible. And I’m learning to accept that that’s okay, because nothing is stagnant about this crazy life we live in.

I’m so grateful for every single picture or small update I get. Those little things give me my motivation to keep going. I may not be able to visit him yet, but one day I will. Even if it takes me 16 more years, I know that reunion will come. That is what I wake up each day and fight for.

Posted by Unknown at 8:00 AM No comments: