Always in my Heart, Always on my Mind

I have had a lot on my mind, just so much has been going on that I haven't really had time to sit down and think about E. I know that sounds really bad, because he should always be on my mind, but I feel like there is a place in my head that is trying to shut that off. Because I have spent almost 9 months trying to just stop thinking about him every second of everyday. I'm trying to cope and just trying to move past the point in my life of sadness and mourning. I have actually been doing a really good job of just staying focused on what I have going on at home.
Ever since E was born and we actually decided on going with adoption, I have wanted to get his intials, his name, his birthday, SOMETHING about him tattooed on me. I wanted to have him be a part of me forever and I have been searching all over to find the perfect representation of him and his adoptive parents and myself. I wanted something that meant something, and I didn't want to get inked and then realize there was nothing I could do to change it if it was something that I didn't like or that didn't turn out the way that I had planned. And I really thought that fate had come along and tapped me on the shoulder when my sister-in-law informed me that she was having a tattoo party for her 24th birthday. So, I thought to myself, what the perfect opportunity to get what I want and start thinking more seriously about it.
So, I did my search and came across the adoption symbol. And I went and did more searching and found the meaning behind the adoption symbol, and I just sat there in awe, and thought about it and it was the most perfect thing I could ever think of doing. Many of you are probably really familiar with the adoption symbol and know that the triangle part is made up of the birth parents (or just birth mom), adoptive parents, and the birth child, and the heart connects the triangle to show the love that each one has for the other. I found the perfect adoption symbol idea and I went in for the consult and I am waiting on Friday for it to get done.
Here is what it will look like: 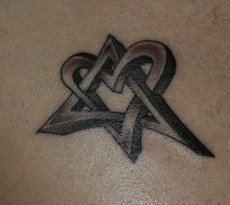 Arching over the top of the tattoo it will say "Hope is", then an under-arch under the tattoo it will say "Easy", meaning that Hope is Ezra (Easy is Ezra's nickname), because he brought so much hope into our lives, all of our lives. and then on the left hand side of the triangle there will be a 6, in the middle of the heart and triangle where that space is there will be a 3, and then on the right hand side there will be a 10. 6.3.10. E's birth date.
I wanted to make this tattoo be something that would always be there, that it would always at least once a day remind me to think of him and make sure that I never ever forget him (as if that would EVER be possible). I am getting it on my left inner wrist, because the vein that it is going on top of is the closest to my heart.
I will be able to blog next week on how that experience goes, just thought I'd touch base here and let everyone know how I was doing.