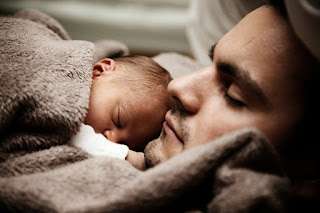 Father's Day is this Sunday.  While Mother's Day is difficult and a tough day to get through us, for my best friend and the father of my child, Father's Day is just as difficult.  Often we talk about our experience as birthmothers and what that means and does to us.  This one time, I want to talk about my son's birthfather, A.

A and I were dating when I got pregnant.  At first, we were terrified.  We had no idea what we were going to do and neither of us were in a good position to raise a child.  We talked, and we talked, and we said just about everything you should say and shouldn't say in order to do this and stay in a relationship.  But we kept talking.

It all came to a head when we got back to his mother's house after going to my friend's wedding.  He asked me again what we were going to do as he put a hand to my swollen belly.  I finally said to him,

"I'm 75% certain that adoption is the right idea.  It's just..."  The thing about A and I, we can finished each other's sentences.  So he replied,

"It gets so loud," I said tearing up.  This was our decision.  The majority ruled.  Our son was going to be placed for adoption.  Then we thought up a name because we do everything backwards.

I was at the hospital with just my mother the first night.  The next morning A arrived with his mother. He stayed with me through the next two days of labor. He held my hand in the OR when they performed a c-section on me.  Once we both heard J crying, I saw A's eyes tear up and even from behind the mask I knew he was smiling.  I have pictures of him in the hospital holding J.  They are some of the best pictures that I have of him.  He stayed two more days.  And he held my hand as I signed the surrender papers; the same papers he had signed just a few days prior.

A has seen our son two more times: once when J was about three months old and again when J was almost a year old.  He hasn't seen him since then.  J is about to be five.  But I want to make this clear: this isn't due to a lack of care on his part.  More a matter of caring too much.  Seeing J is a torture to him.  Placing our son for adoption was the hardest thing both of us have had to do thus far, and he has dealt with it much more slowly than I have.  He is getting better.  During the last few visits, I've sent pictures to his phone instead of just his email at his request.  Every time he is stunned at how big J is and how great he looks.  One day I hope he can have a visit with our son again.  And J's adoptive parents have been amazingly understanding about this.  I've explained the situation and their words were simply, when he's ready, just let us know and we'll set up a visit.

I know not everyone has this experience.  And I think it's unfortunate that so many men turn away from their children and just don't want to know.  But those men who do acknowledge their children and love them even from afar, suffer as much as we do.  One thing I've had to do again and again since this has happened, is defend A.  I don't like that I have to do it, but I do it because it should be done, because he does deserve to be defended, because he is still my best friend who went with me through hell, and because when all else fails he's the only one in the world who knows what it's like to miss our son, J.

This Sunday, I'll tell him Happy Father's Day, just as he wished me Happy Mother's Day last month.  And I'll thank my lucky stars once again that I have him in my life.