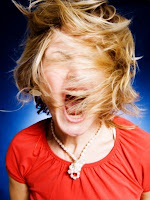 Have you ever found yourself placing blame where it doesn't belong when it comes to your adoption? I don't necessarily mean placing blame out of guilt or regret, but what I mean is, have you ever justified your decision to yourself by trying to reason it out? I started thinking about this the other day. Oftentimes, there is anger associated with adoption when it comes to birthmoms. I suppose I can only speak for myself, but I can admit that my anger has sky rocketed in ways that it never had before since placing my daughter. I do not regret my decision - yes, sometimes I wish I could go back in time and make a different decision - but I know in reality that even if I were given that chance, I would still make the same choice. Because this is not about me, my ex, or my family. This always has been and always will be about and for my little girl.

The other morning, as I was doing my hair and getting ready for work, I noticed my rabbit out of the corner of my eye. He was jumping and bouncing around in his cage, and then he started furiously scratching at his food bowl. I walked in to the room we keep him in, and realized that his food bowl was empty from the night before. I said to him (yes, don't laugh, anyone who has animals talks to them, and I won't believe otherwise ;)) "why are you scratching your food bowl?! It's not your bowl's fault that it's empty - YOU ate all of it." Something clicked in my head when I said that. Hmm, who knew 'talking' to a rabbit could bring you to a revelation about yourself? I started to realize that I have put blame on others for my decision to place my daughter, even though I stand by my decision and strongly believe in it. I believe, at the end of the day, that I did the right thing for her. Was it the right thing for me? Maybe not. But that doesn't matter. The moment you are pregnant, that other being comes before you. That's being a parent. Back to my point - misplaced anger and blame. I have deflected blame onto other people and circumstances in my life, when really, I shouldn't. I spent a long time blaming her birth father...thinking, 'well, if he had done this, or said this, or shown me this,' etc. I also spent a great deal of time blaming my parents. I thought if they had just offered a little more help, I could have kept her. I blamed the fact that I took a year off from school before going back. I blamed the fact that I hadn't graduated from college yet. I blamed my $12.00-an-hour job. I blamed my $280 car payments for the fact that I had no money. I blamed every one and every thing until I started to resent every one and every thing, all so I could avoid being angry at myself for not being able to be the parent my daughter deserved. I apologize if this post is too depressing; I always try to remain neutral, however, I am just being honest.

Can you believe my angry, hungry little rabbit made me realize all of this? My point is, if we feel that we need to forgive ourselves for our decisions, then we need to do just that. Forgive. Holding onto anger, especially anger directed at oneself, is a recipe for absolute disaster.

So, do you ever feel angry when it comes to your adoption or placement because of circumstances out of your control?

Photo Credit
Posted by Elizabeth at 5:44 AM