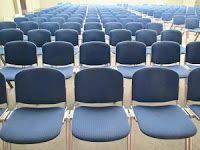 Has this ever happened to you? You give up on something, totally resign, throw it in the round file, give up the ghost; however you want to say it. You renounce it, announce it, and tell everyone that you no longer want to do whatever it is. And you're serious. At that moment, you are totally serious and mean what you are saying.

I tried that with public speaking six months ago. I was so done. Over it. Never going to do it again. I didn't like it. It didn't like me. I was boring myself, boring my audience, and making a fool of myself. I knew I was supposed to share my story of unplanned pregnancy and closed adoption, but after the last time, I was done.

So the exciting news is that I got six months off. The not-so-good news is that I now have three speaking engagements in the next two months. Three. And none of them did I seek out, look for, apply for or otherwise market for. I told you, I was done. Done done.

So my point is that for me at least, this story doesn't belong to me. For me, the saga that is my life belongs to my Creator God. And if he desires for me to share it with people in a public setting, so be it. Do you ever feel like you want to keep your story to yourself? Do you ever feel like God wants you to be more vocal about it than you are?

Photo credit
Posted by Terri Gake at 12:01 AM