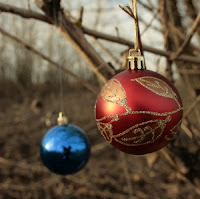 This used to be the time of year, every year, that I would start sinking into despair. It wasn't fast, mind you. It was more like quicksand. After Thanksgiving, I would cross over that magical line of time from where there was no return. And throughout December, January, and February I would get lower and things would get darker. It happened every year, whether I meant for it to or not.

Getting to my birthdaughter's birthday in March was actually a relief. It meant that my life could go on. I could start smiling again. The dark days were behind me. Well, until the next time.


Grief is so like that. It has a mind of its own. I didn't plan to start sinking into depression after Thanksgiving. I didn't write it on my calendar so I wouldn't forget. In fact as the years went on, I didn't always recognize it at first. I would be just moving forward and then something would break or go wrong and I would just LOSE IT. And then, in my broken state, I would ask 'what is going on with me?' Then I would look at the calendar and it would dawn on me that it was early in the year and I was already dreading The Birthday.
So what's different now? I can't really say. I guess the years have given way to a busy family and I don't always have time to stop and look at the calendar. This has been a different sort of year for me as my birthdaughter's own family is growing. While reflective, I'm not sad. Not like I used to be. Time has helped. God has covered those places in my heart that are tender and he protects them for me.

I promise you that life will go on. You won't always grieve and be sad at holiday time or any other time. For me, the grieving time got shorter and shorter. I guess I'm still touchy around The Birthday. But now that I'm sleep-deprived most of the time, that day seems about like any other day.