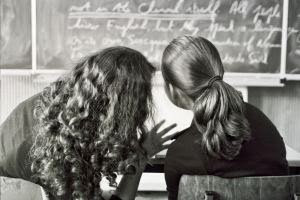 Several months ago, a friend of mine came to me in tears.  Her first words to me were, “I wish I had placed my daughter for adoption instead of keeping her and giving her this life.”  My friend is a single mother.  When we talked about my son and all the choices made, she told me she had considered adoption, but just couldn’t.  She was in a very different situation than the one I had been in so I didn’t fault her for her choices.  When she came to me with this sudden statement, I calmly reminded her that while she is a single mom, she is keeping a roof over her child’s head, her child is happy, well fed, and doing quite well as far as I can see.  Then I asked what prompted this.

As it turns out, her daughter, who is now seven I believe, is starting to figure out that not everyone just lives with mom.  Most people live with mom AND dad.  Her father has never been an abusive or bad influence in her life, just a very absent one.  And because she is seven, she just doesn't understand everything right now.  I assured my friend that this was not a case of her being a bad mother or making the wrong decision when her daughter was born.  This was simply a matter of a bad day and a girl who is growing up.  And as every child grows up, they want to fit in.  She bemoaned not giving her child a normal life which I had to counter with,

“Hon, MY kid isn't going to have a normal life either!  Yes, he has a mom and dad who are at home and care about him.  But he also has a birthmother he gets to see a lot, a birthfather that I hope he will see more of in the future, and sooner or later he’s going to have to reconcile all of that in his little brain and fit it together so that he understands.  His life isn't normal, no one’s life is normal.  The best you can do is be the best parent you can for your kid.  And I already know you are doing your very best.”

Then recently, I had another conversation that I never expected to have.  I was showing a long-time friend pictures of my son from the birthday party earlier that day.  That was when she told me she’s had a long-held desire to act as a surrogate for a couple at some point in her life.  I've known her a long time, and while I was slightly surprised by her confession, it didn't really shock me.  What kind of shocked me was what she said next.

“Would you-since you ended up being an unwilling surrogate essentially-would you be angry with me for doing that?”

“No!  No, I wouldn't be mad at all.  I would caution you.  It is a very taxing thing on the mind and the body and the emotions and even knowing the child isn't going to be yours, you’ll still have a connection to that child and you will still have something growing inside you and it’s going to have an effect on you.  But no, if that’s something you want to do for a couple, I would not be mad at you at all.  And if you wanted me to help you out with the emotional aftermath, I will be there for you.  If you want me to be around before that, or just keep away, or whatever you want me to do, I’d do it.”

She nearly cried.  I nearly cried.  But I was, once again, speaking in all honesty.  For some parents, that’s the route they want to go, and I understand it completely.  I think my friend was really worried about coming to me to complain about her aching back, her swollen ankles, the emotional aftermath, and how easily I could turn and say to her, “You asked for it.  Don’t complain to me.”

I could do that.  But I can’t.  Even if she did ask for it and I didn't, I couldn't be that mean to someone who is doing a truly wonderful and beautiful thing for someone else.  I try very hard not to compare people and their lives and situations to each other.  What one person can survive, others may not be able to.  Our situation is one that most can’t understand unless they have had to make the choices themselves.


What weird and strange conversations have you had with those in your life who know about your kids?  Has anyone else had weird conversations like this?  Or am I the lucky only one?  Ha ha!  It won’t bother me if it’s true.  I’ve been privy to many facts of my friends’ lives that others will never hear of.  Mostly this is because I’m known for my non-judgmental stance to almost everything and my ability to be a secret keeper.  But I know I never would have had these conversations were I not a birthmother.