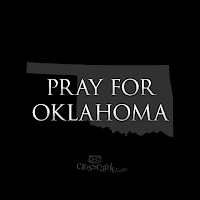 The tragedy in Moore, OK hits home for me as a birthmother in a closed adoption. How many of those children lost are adoptees? How many birth-parents will never have the opportunity to know their "lost" children?

These are the types of things that make me feel so strongly that open adoptions should be the norm. I understand there may be certain situations where open is not an option. But, we are mothers. We love our children. We worry about them. Most of us have the utmost respect for the parents that are raising our child. But, just because we chose adoption, or perhaps were even forced into adoption due to tragic circumstance, is it really fair that we don't get to know that they are safe? Is it really fair that they don't get to know where they come from?

In spite of a closed adoption, I know more about my son and his life than most in my situation do. I am so grateful for a tiny slip up on the adoptive parents part by including a picture with their last name in one of the very first communications I received when our adoption was semi-open.

We choose adoption so that our children can thrive and grow. A tragic tornado is just a ruthless reminder that we have no control over the life our children will have.

Labels: Bethany's Bloggings, Closed Adoption, Coping with being a Birthmom, Dealing with Grief, Identity, The Future