What's in a Generation? 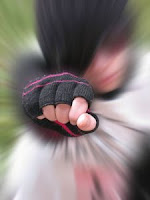 And the era of the 80's was remembered for big hair, neon colors and Madonna.

I had a conversation this week that has just been rolling around my head. The lady I was talking with is about the same age as me. In fact, we had our first children in the same year. But she went on to mother and bear other children while I went on to finish high school.

And although we are about the same age, my young children seem to give the impression that I am younger than I am.

So what's in a generation? A general knowledge and understanding of 'how things were'. For example, I didn't have a cell phone growing up. And the first time I had a computer class was in high school.

What I don't have is an understanding of my birthdaughter's generation. Since I went back to my own childhood, I didn't pay attention to hers like a parent would. I don't know if she had computer class in school and how early. I don't know when she got her first cell phone or any of the other 'earmarks' of her generation.

No wonder the old-timers talk about a generation gap. I can see that now. Not only did we not share life, but I don't have an understanding of her formative years and what she experienced.

Labels: Closed Adoption, Coping with being a Birthmom, Terri's Story