Abraham, Isaac and Me 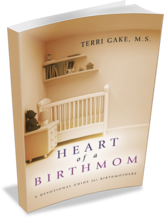 While I'm away enjoying some vacation time with my husband this week, I thought I would post a devotion from my book entitled Heart of a Birthmom. Of all the devotions in the book, this one is closest to my heart. I hope whatever your spiritual leaning you will take a second and read through it tell me if you see yourself anywhere in it.

He said, "Take your dear son Isaac whom you love and go to the land of Moriah. Sacrifice him there as a burnt offering on one of the mountains that I'll point out to you."

The boy and I are going over there to worship; then we'll come back to you."
Genesis 22:1-5 The Message

As a birth mother, this is the passage of the Bible I have always claimed as my own. Who else on earth can better understand what Abraham was feeling than a birth mother? We have been at that place and have chosen a different life for our children regardless of the consequences. To this day, I get emotional thinking about what God asked Abraham to do. I am awed by the faith Abraham had in order to follow God's direction to the letter.
Notice what Abraham says to the servants. He says that he and the boy are going to worship and then "we will come back." God had asked him to sacrifice his one and only son, yet Abraham's faith was so big that he was sure his son would be returning with him.
When I signed those papers and released my daughter into the care of another, it felt like this passage feels. I had no promise that I would ever see her again. I had no idea what the days ahead would hold. I just did it. In the same way, the Bible says nothing of Abraham's state of mind. We don't hear him complaining. We don't even see him hesitating. What we see is Abraham snapping to attention and doing exactly what God asked of him. God doesn't intervene until that last possible moment. God wanted to know if Abraham was really going to follow through. The Bible says "...he reached out his hand and took the knife to slay his son." That is when God stopped him - at the last possible moment.
It's interesting that God chooses Abraham for this task instead of Isaac's mother. Obviously, God is preparing him for a higher calling. As a result of meeting this challenge with obedience, God promises to make Abraham's descendants as numerous as the stars in the sky and as the sand on the seashore. This is a promise that God fulfills throughout the rest of the Bible.