Message from an Unknown Chinese Mother 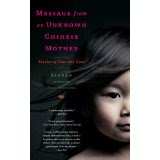 For this week's post, I want to review a book by Xinran called Message from an Unknown Chinese Mother. Xinran is a Chinese journalist who has an amazing gift of getting women to tell her their stories. The stories of Chinese mothers driven to place their daughters for adoption or abandon them on the streets are beyond words.

Despite the fact that the book was originally written in Chinese and then translated to English, the author's voice is strong and compassionate and caring. As she learns about the harsh realities of the People's Republic of China, the reader is learning alongside her.

Her descriptions are vivid as she contrasts the dirt poor of the farm people with her own life as a city dweller. The first time she goes out to the country to interview a family, she is overwhelmed with the difference from her own existence.

We as the reader also learn, from the inside out, what the 'one-child policy' really looks like to those who have had to endure it.

Your time would be well-spent in reading this work. I know as birthmoms we have all struggled, but the women of China have been much worse off than most of us have ever dreamed of being.

Photo credit
Posted by Terri Gake at 5:23 AM