Those three days I spent in the hospital after Noah was born via c section were painful and very confusing, especially for someone who was overwhelmed with so much emotion it was hard to feel each one completely.  I was happy, sad, scared, and shocked, but how was I supposed to feel each emotion?  I was in a state of numbness, honestly.

My sweet boy was placed in the NICU because there was a little bit of water in his lungs, he was breathing too fast.  That was so scary, because I was unable to leave my room to see him there since I had just come out of surgery.  I just wanted to spend more time with him, but it was about him, not me.  He needed to be there to get better.

The day after Noah was born, family and friends came to see Noah and fell in love.  He had to have been the most beautiful baby in the hospital (biased, of course).  I had a million pictures of Noah the night he was born but none after.  This is a hard thing to accept and my biggest regret.  I wish I had spent more time with him in the hospital.  It would have been easier if he was born naturally but because I had surgery and he was 3 floors up from me in the special care unit, it took a team of nurses for us to get to each other. 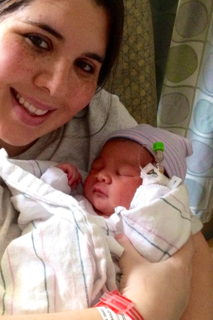 I went up to see him on my 2nd day, because that was the day I was able to leave the surgical floor.  My mom and sister were with me....he looked different.  I have felt this way every time I have seen him since, why can't time stop?  Why can't he stay the way he was when I first laid eyes on him?  I guess that's how life works.  When I saw him, I was so overwhelmed.  How could I love someone so much?  It seemed impossible.   I went to see him again the 3rd day, this time alone.  I knew that this was going to be our last visit alone together for a while.

When I walked over to him lying in his bed, his eyes opened.  I will cherish that moment forever because that was the first time I saw his brown eyes wide open staring at me, it was like he knew me.  He did know me.  I was the mother who carried him for nine months.  He heard me cry.  He heard me laugh.  He heard me tell stories to him.  He knew who I was.

After that visit, the next time I went to the special care unit was to place him in his parents arms in the Entrustment Ceremony we had planned.  We wanted this moment to be special.  A beautiful prayer and poem were said by a counselor we had known.  I only remember how beautiful it was because I had looked over it before it was said.  While this woman was reading it, my face was against Noah's sobbing.  I knew Noah deserved a family and they were the most amazing people.  I placed him in their arms then actually calmed down.  I talked with the A parents for 20 minutes like we were old friends then left.

I am so glad that I left Noah's room feeling like that instead of crying.  I knew how happy Noah was going to be, and that gave me so much peace.