The Pain of being a Birthmother Lasts Forever 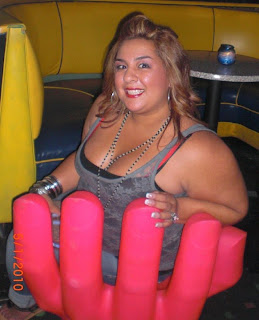 "I never knew that it would last forever
....because it never stops."
- Catelynn ( of MTV's Teen Mom)

Allow me to introduce myself. I'm Michelle, a single mom to an amazing 6 1/2 year old son, and a birthmom to an equally amazing almost 5 year old little girl. Alot of people don't know that I am a b-mom, so when Coley asked me to do this blog, I was almost a little hesitant, but figured, WHY NOT? I have quite a story to share, and if my story could help other people, then it was all worth it.

I come from a very traditional family background, so when I came home 7 years ago at the age of 20 and told my parents that I was pregnant with my son, they almost had a heart attack. They were disappointed and heartbroken, but never stopped supporting me, even after I left C's dad a month after he was born. They helped me watch him while I went to school and did what I had to do to better myself. What they didn't know, was that I was out doing things I wasn't supposed to do, and a year after I left my son's dad, I had a one night stand that changed my life forever.

I hooked up with J on a December day in 2004. I felt disgusted with myself after I left and vowed to make a resolution to make guys respect me and treat me right. I changed my life to revolve on being a better parent and a better person, until I found out I was pregnant again. I felt like my whole world came crashing down. I couldn't have another baby. My son had just turned a year old. I can't be a single mom of two kids! So I scheduled an abortion for the following week.

I pushed everyone out of my life as soon as I found out, so when it was time to go have the abortion, I went alone. On my way, I passed by a church, and even though I went to Catholic school when I was younger, I didn't consider myself to be very religious. I went anyways and had a one on one talk with God. After lots of tears, we came to an agreement that he would forgive me for the mistakes I have made, if I gave this baby the life it deserved. There were plenty of people who would die to have a baby, and yet here I was planning on killing the one inside of me. Instead of going to the clinic, I went home and stayed pregnant.

I kept my pregnancy a secret. I was in denial. Things like this don't happen to girls like me. I am smart, educated, come from a two parent, loving household. How could this be happening? I went to work and lived my daily life as a normal person. I worked retail at the time, and when customers would ask how far along I was, I would answer back with "I'm not pregnant, I'm just fat." There were days when I would pray not to wake up in the morning because of the situation I was in. It was the saddest, most darkest time of my life.

When I was about 6 months pregnant, my manager at work sat me down and had a conversation with me. She said "We have been noticing a change in you and want to talk to you as friends. You have been gaining alot of weight lately, are you pregnant?" It was the first time I admitted to anyone, including myself, that in fact I was. When she asked what I was going to do, I told her that I had thought about adoption. One of the ladies at work had a niece who just became an A-mom, and she gave me the information of the adoption agency she had gone through.

Fast forward to three months later, after I had gone to the agency, looked at their prospective a-parent books, picked a family, met them and fell in love with them. I still hadn't told my family. I had decided to tell them on a Friday, when I was scheduled to be off from work. I knew it was now or never since I was due in about 2 weeks. I went to bed on Thursday night, and woke up at 3:30am on Friday morning, thinking I had peed on myself. When I stood up out of bed, water gushed out of me and I thought "O M G - My water just broke." I had to wake my dad up (my mom worked nights), and tell him, "Dad, I'm 9 months pregnant and my water just broke" HOLY MOLY!!! He was in so much shock. He yelled at me for an hour and then took me to the ER. It was nothing like I could've imagined it to be.

I gave birth a few hours later to the most beautiful, healthy baby girl ever. She was absolutely perfect in every way. When I saw her a-parents hold her for the first time, I knew that I made the right choice, but I never expected my heart to hurt so much. I think it hurt even more because my family was so angry with me. I had hurt and disappointed them. I didn't give them an opportunity to even accept what was happening. It was truly a difficult time for all of us.

I gave birth to Hope on that Friday morning, and was released from the hospital on Sunday afternoon (September 11, 2005). It was the last time I got to hold my baby girl in my arms. It was the day I whispered in her ear and made the promise that I would be someone she could be proud of when we met again. It was the day that I had to part with a piece of my heart, but a day I never regretted.

I was in denial for a long time, as was my family. For years, while I hurt on Mother's Day and around her birthday, I never really showed it other than being a little more emotional and alot more bitchy. My family was very angry, and everytime I got pictures of her in the mail, my mom would go on and on about how she couldn't understand why I would do that. It was the cause of alot of fights between us.

While I spoke at bi-annual workshops for the adoption agency I placed through, I never met any other b-moms. I always felt like I was alone in feeling the way that I did, and always felt like I had to be strong and get past those feelings. I never had anyone I could relate to or to show me that it was ok. That is, until MTV aired the show 16 and Pregnant. I never thought a show that followed pregnant teen girls would change my life, especially as an adult. But it did.

When 16 and Pregnant showed the episode of Catelynn and Tyler, I sobbed throughout the whole show. It was the first time in my life that I had seen someone else who was real (Juno didn't count), go through the feelings and thoughts and emotions that I went through. As the cameras followed the pair through picking the a-family and meeting them, all the way to birth and seperation, I felt everything the couple felt. For once, there was a true depiction of what adoption looked like, as well as felt like. I think I watched that episode 3 or 4 times, and I know my mom and sisters watched it as well. They were finally able to understand what it was like to be in my shoes, and understood so much more.

When the show Teen Mom came around, depicting life after pregnancy and birth for 4 of the girls, including Catelynn, there was alot of controversy based on the idea that "she really isn't a mom." Who says she isn't a mom? She gave life, and while she didn't parent her baby, she gave her a better opportunity to be raised in a household of love and care, where things could be provided to her, by parents who had the ability to.

The first season of Teen Mom not only showed the difficulties and drama of being a mom at a young age, but it also showed the feelings of loss and sadness after placement. I felt the feelings Catelynn felt. I wanted to reach through the tv screen and hug her and tell her she wasn't alone, that I felt the same way she felt. The frustrations about not getting pictures when she was supposed to, or of not knowing certain things about the baby. I learned from her, and after watching the episode where she went to a b-mom retreat and met other b-moms, and seeing how much that helped her, it made me want to seek support of my own.

Thanks to Catelynn, I was able to feel the feelings that I had never let myself feel in the past 5 years. Thanks to Catelynn, my mom and sisters are able to understand a little bit more about why I did what I did and how I feel about it, even though I don't show them my emotions towards it. Thanks to Catelynn, I found Birthmom Buds. It was in thanks to watching her that I was able to reach out and seek support of my own. I flew all the way across the country, from Los Angeles to Charlotte, NC, to get that support, and it was life-changing. That girl on tv led me to a whole new world, a world where when someone says "I understand", they truly mean it. It's amazing how much healing I have been able to do thanks to the amazing group of women I met while I was across the country.

While this second season of Teen Mom so far seems to be focusing more on the relationship between Tyler and Catelynn and less on the adoption itself, which is the whole reason why they are on there in the first place, I am sure there will be more adoption issues that will come up as the season progresses. It's not just a show for teens, it's a show for everyone. This will be a place where we can discuss what we like and don't like, and how it relates to us, and our feelings. If you haven't watched Teen Mom yet, you can do so here.
Posted by DodgerGurl at 8:29 AM