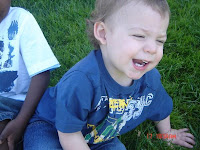 Hello everyone! There is a someone out there reading this, right? I am Debbie, and I am the mother on one side of an open adoption. I am 24 and live in the great (wet, rainy) city of Seattle. Blake, my son, will be 3 on September 15th. He is currently in the custody (permanently, though its a bit more complicated than that) of a wonderful couple in Virginia. That's where he was born. I should back up, I suppose, to how all of this began.

(Do you hear the VCR rewind sound I am making? NO? Imagine with me!)

The year is 2007. I am 20 years old and carefree. Well, as carefree as I could be. I live with Erik (soon to be known as bio dad) in a crappy garage apartment, but its all we can afford. We have been together nine months. As part of what every responsible couple should do (says the high school sex ed teacher in me) we discussed what would happen were I to become pregnant. So here it is, winter of 2007. Erik has the feeling before I do, and off to the pharmacy I go. The first thing I notice is how expensive pregnancy tests are! I think that one test cost us a lunch. For some reason, I still couldn't explain it, we headed off to the library, into the separate mens and womens bathrooms, me to pee on the stick, him to have somewhere to wait the required three minutes and not show the world how nervous he was. Sure enough, there were two pink lines. After the required three minutes he emerged to me sitting, shifting on one of the benches. I didn't have to say anything, he knew.

Frenzied, we begin the search for a family for the alien growing inside me. Neither of us were particularly attached to it yet. We looked at agencies, had some family portfolios mailed to us. There must have been some telephone list we ended up on -- several churches called to ask what we were doing with our baby. The alien was only a baby to us (so far) in that we knew it needed a family, and that the family was not going to come from some church telemarketer.

Fast forward (that sound again!) about two weeks. I am nervous, scared, alone. Erik is talking to his boss at work, just to have someone to talk to about all of this. Lo and behold, boss man and his wife were unable to become pregnant and were looking into adoption. They, like us, are working class people and cannot afford the fees associated with private agencies. It was almost a dream come true when Erik called me at work to tell me that they wanted to meet me. I wanted to meet them, had to I felt. The mix of emotions leading up to our meeting was huge on my end. The alien was becoming a baby, more and more so as we found it a family. All I remember from that first meeting is sitting on their porch, probably 3 months pregnant, and knowing that this was it. I didn't hide it, I told them right away.

My pregnancy was fairly normal, aside from what seemed like never ending vomiting. T (amom) was there for all of my doctors appointments. She took his ultrasound pictures home, to her fridge. I watched T and H build a nursery for the Baby...no longer an alien. I would visit weekly, walk baby through his room, tell him how excited I was, how beautiful it was and how much T and H loved him already.

About 5 months into my pregnancy, T and H started foster parenting classes. They wanted a fall back plan. They lived in a trailer on H's parents land for years, ate ramen noodles, scrimped and saved to have the money to get a house and have kids. They couldn't. This time, they didn't want there to be a failure option. I was so proud to see them go. About a month before Blake was born, they got their 3 foster kids. What a glorious day it was, but oh how nervous was I. Would they still want my son now that they had a houseful? Yes, oh how lucky I was, they still did.

I will never forget the night he was born. Of course, who does? My water broke, Erik ran to the neighbors. I'm still not sure why! Off we went to the merry hospital. T met us there (H was still home with the kids). I will never forget what she said to me. I got into the elevator with T and Erik, and T looked at me, half scared, 21 years old in labor with their miracle baby, and with all the love and courage in her heart said 'If you guys cant go through with this you can have all of our baby stuff.' I know that doesn't sound big, but it was. It was huge. We were now in this together no matter what.

The next morning there was a baby. H and T hadn't even thought of his name until a few hours before he was born, they were so afraid they would not get their son. Blake Edward. It was a perfect name. Blake is the name of my best friend, someone who is an amazing part of my family. Edward is bio dad's stepfather, that raised him. Perfect.
That's enough details for now, I suppose. Basically, the adoption isn't finalized but we all agree that Blake is their forever son. They have adopted 2 of the 3 foster kids and recently had twins of their own. Each of these topics will be another blog post.

We (Erik and I) moved to Seattle when Blake was 2 months old. It was just too hard on us living 5 miles from our son who wasn't our son. I go back once a year for a visit. Amom is a friend on facebook, I call her whenever I want and she texts me bunches. She's a part of my family now. It's not all rainbows and sunshine, but for this overview it shall be.
Posted by Debbie at 6:06 PM