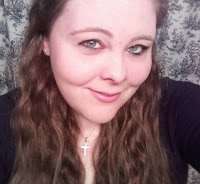 Today's featured blogger is Elizabeth of "My Little Blessing in Disguise."  Let's find out a little more about Elizabeth....
First, please tell us a bit more about yourself (name, age, where you live, what led you to making an adoption plan, and anything else you feel comfortable sharing).
My name's Elizabeth, and I live in Massachusetts. I was 21 when I got pregnant, 22 when I had my baby, and I am now 23. I would have to say that animals, writing, and photography are the three things I am most passionate aboout. There are a million little reasons that all make up the "big picture" of why I chose adoption for my daughter. The first and biggest being the fact that I can barely take care of myself at this stage in my life. I am in no way fully independent; my parents are still putting a roof over my head and helping me pay my way through school. I wanted my daughter to have an even better life than I had, and I knew that I could not be the one to give that to her. I grew up with both of my parents under the same roof and couldn't imagine it any other way, and I didn't want my little girl to not only know how it feels to imagine it, but to know how it feels to live it. I was with her father for a few years (and coincidentally found out I was pregnant three years to the day since we got together) but knew he and I would not last, and if we did, we could not create a stable environment for our baby. We fought every other day, we just had grown apart and soon realized that we brought out the worst in each other. I knew I could do it, I knew I could be a single mom and we would make it, but I didn't want my baby to only have the basic things she needed, I wanted her to have what she wanted as well. I didn't want to have to sacrifice her Christmas gifts for Christmas dinner, and I didn't want her to be in daycare all hours of the day while I worked to barely make ends meet. I wanted the best for her while still wanting to be with her and knew the two just simply could not work together; they were like water and oil. So I put on my big girl pants (hahaha) and made the decision that was best for her. I have my teeny tiny doubts every now and then, but ultimately I know I made the right choice for her, especially when I see what a truly happy baby she is. Already, at eight months old, she has more luxuries provided to her (like music class) than I could have given her in eight years.

When and why did you begin blogging? I began blogging in October of 2010, because I was nearing the end of my pregnancy and realized that I desperately needed an outlet to get my feelings out. At that point, only my parents, my daughter's father, and the girls I worked with and my very best friend knew about my unborn daughter, so I didn't really have many people to reach out to. I wanted a place where I could basically talk to myself, but also feel like I was getting some weight lifted off my chest with no repercussions; no judgement. As time went on, I kept blogging, and now I keep up with it not only to be able to take note of areas I have progressed in and areas in which I still need to heal, but so my little girl (if she so desires) can see how I truly felt in my days up to and after placing her.


Tell us more about the title of your blog.  Why did you choose it? My blog is titled "My Little Blessing in Disguise" because that is the most fitting phrase I could think of to describe my daughter. She came disguised because she was a big surprise for me, and I had not planned on having children for many years (if ever) and certainly not with the man I found myself pregnant with. In all honesty, when the doctor said "well, that test was positive!," I thought those were the five worst words I could hear. Shortly after I came to terms with it, though, I realized what a blessing she truly was in my life; whether I parented or chose adoption for her. She made me realize so many things about myself before she was even born. Mainly and most importantly, she helped me see the true colors of the man I had been with and been in love with for three years. When I am being honest with myself, I know that if it weren't for her coming into our lives, I would still be in the dead-end relationship I was in with him, just spinning circles. That's the story behind my blog title! And the URL is the name I gave to her when she was born.


Has the response to your posts been mostly positive, mostly negative, or a mix of both? So far, I have seen only positive replies....if anyone has any negative thoughts, I haven't heard them (yet). However, I have only recently made my blog public. My first blog (the livejoural which is linked to my blogger) was private up until about a month ago, when I switched over to blogger and made it open.


What post on your blog do you consider a “must read” for people visiting your blog for the first time?  Or what post(s) from your blog is (or are) your favorite(s) and why? I would have to say this post: "Unintentional rant" because it sheds a lot of light, in my opinion, on why the decision to place is made and how it is made. I can only speak for myself, but I think it shows the "other side" of adoption...the true side of a birth mother, the side that not a lot of people see or want to see. It proves the negative stereotype wrong, the one that says that women who gave their babies up just wanted to "get rid of them," or didn't want the responsibility. My favorite part about that post is the fact that when I started writing it, I had planned for it to go in a completely different direction than it did, and then it wound up the way it is now.

Do you have any advice for someone thinking of starting their own blog? Only think about yourself, and your honest feelings. Don't hold back from saying something because you're afraid you'll offend someone. There will ALWAYS be someone that will be offended by something you say or don't say; that's just life. Even with my own blog - I'm sure there has been or will be something I will say that could offend someone who is or has been in my very same situation. Be honest with yourself, and don't create an image of yourself for others to see. Just be you! You'll appreciate it later on down the road.
Posted by Monika at 8:00 AM