Father's Day, A Standing Stone in my Journey 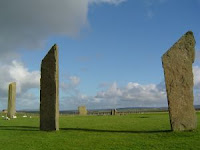 Have you ever heard of a "standing stone"? There are so many standing stones in my journey through the world of birthmothering. In the Bible, a standing stone was a literal stone or group of stones set up as a physical witness to something specific that the Lord had done.

In the book of Joshua, for example, God's people took the Ten Commandments into the Promised Land. They had to cross the Jordan River which was at flood stage. Incredibly, the Lord stopped the flow of the river and all the Israelites crossed on dry ground.

After all the people were through the river, God said, "Choose twelve men from among the people, one from each tribe, and tell them to take up twelve stones from the middle of the Jordan...and carry them over with you and put them down at the place where you stay tonight." (Joshua 4:2-3)

God had them leave a physical reminder to his miracle.

For me, Father's Day 1993 is a standing stone. It had been six years since my daughter's birth. I had graduated from high school and was about to graduate from college. Life was pretty good although I struggled to 'keep the secret' of my birthdaughter. But on the inside, I was still filled with hate and rage, anger, hurt, and, well, you get the idea. I still had a long way to go in my healing.

I can't tell you what the message was about that morning in church, but in my head I heard an audible voice say, "Forgive him." Through my tears I quietly asked, "Are you CRAZY?" and then proceeded to remind God of all the ways K had hurt me. Now, it's important to note that I had no contact with the birthfather. He was not part of my life. But I was angry like I had just seen him.

God got through to me that day and after many tears I did forgive K, or at least I gave him over to God for probably the first time. That day marked a major milestone in my life.

Like Joshua at the Jordan, I have marked that day as a standing stone in my journey to freedom. Forgiving K was not some magic pill that made all of my hurts go away, but it was a step. I needed to forgive the birthfather not so that I would be all better, but because not forgiving him was hampering my ability to move forward.

What about you? What standing stones have you set up along the way? Maybe today is a day to remember. I love reading your comments.