This week's featured blogger is Amy Hutton of Amstel Life.  Let's find out a little more about Amy...


First, please tell us a bit more about yourself (name, age, where you live, what led you to making an adoption plan, and anything else you feel comfortable sharing).
My name is Amy Hutton, I am 24-years-old and I live in Raleigh, North Carolina. I grew up in Pittsburgh Pennsylvania, and I found out I was pregnant during my senior year of high school.  My boyfriend at the time, Robbie, was incredibly supportive and we immediately decided to raise our child together.  Robbie’s family had recently moved to Raleigh, and they had become good friends with a couple who couldn’t have children and were looking to adopt.  When Robbie’s family found out that I was pregnant, his mom asked me if I would consider meeting this couple.  Even though I had already made up my mind that I was going to raise my daughter, I reluctantly agreed.  The first time I met Don and De was at Panera Bread, and something just felt right.  They told us that they wanted to have an open adoption and that meant Robbie and I would be able to visit often and maintain a one-on-one relationship with our daughter.  I knew in my heart that this was the best decision for my daughter, but I also knew it would be the hardest.  Robbie and I spent the last 4 months of my pregnancy getting to know Don and De.  We talked about how our open adoption arrangement would work, how often we could visit, and we asked each other every question we could possible think of.  Robbie and I moved from Pittsburgh to Raleigh immediately after I graduated high school in May of 2005, and on July 11, 2005, Deanna Marie was born.  There have been many incredibly difficult and trying times throughout the adoption process, but there have been even more amazing and worthwhile times.  This summer will be six years since the adoption, and I can’t imagine where my life would be without Don and De.  Yes, I still get to see Deanna often.  She calls me “Amy Hutton” and knows that I am her “tummy mommy.”  I truly look forward to spending time with Don and De when I visit them at their new home in South Carolina. Some of my favorite times are after a day of fun on the beach, having the opportunity to read to Deanna and put her to bed, and sitting outside on the patio with Don and De, drinking coronas, and talking about how we ended up in each other’s lives.  There is no better explanation for how perfectly our open adoption has worked except to say that it’s a God thing!
When and why did you begin blogging?
I started Amstel Life in February of 2009.  I decided to start blogging because there were a lot of people who had questions about what “open adoption” was and why I made the decision to place my daughter with a family we had just met.  Instead of telling the same story a million times, I decided to just start writing about it.  Amstel Life eventually morphed into a very personal account of my emotional journey through the process of open adoption.  I’m a very private person, so I was reluctant to share my emotions and thoughts about open adoption with “the entire world.”  When I realized how many people were reading and commenting on my posts, learning about the positives of open adoption, and sharing their own adoption experiences with me, I knew that opening up my personal life was well worth it.  The first time a birthmother contacted me and told me that my blog helped her to cope with her own adoption experience, I was blown away.  Knowing that Amstel Life had such a positive impact on others made it easier to open up and write about my journey through open adoption.
Tell us more about the title of your blog: Amstel Life.  Why did you choose it?
I began my freshman year of college one month after having Deanna.   To say that it was a very dark and difficult time in my life would be an understatement.  I battled depression and feelings of guilt, and I often cried myself to sleep.  While I knew Deanna would be okay, I wasn’t so sure about myself.  One time during my freshman year, I was at a college party with my friends, and I randomly started telling people that my name was Amstel.  (My friends and I were really mature back then).  We got some really strange looks, and most people didn’t believe us, but it always resulted in a good laugh.  Introducing myself as “Amstel” was the first time I remember being able to truly laugh again and let loose after Deanna was born.  The nickname Amstel stuck with me, and to this day, my friends still affectionately refer to me as Amstel.
Has the response to your posts been mostly positive, mostly negative, or a mix of both?
The response I’ve gotten to my posts has been overwhelmingly positive. Although I have had a very positive experience with open adoption, I do try to keep in mind that not everyone has had the same experience.  The few negative comments I get on my blog are usually from people who have had a negative adoption experience and are still hurting.  Someone once told me that “hurting people hurt people” so when I read the negative comments, I try not to take it personally no matter how insensitive the comment may seem.  I am constantly reminding myself that the point of Amstel Life is to show people, through my own personal experience, that open adoption can be successful and beneficial for everyone involved -- and it’s one more an alternative to abortion that many women haven’t considered.
Do you have any advice for someone thinking of starting their own blog?

My advice to anyone thinking of starting their own blog is to find something you are passionate about and write about it!   When you write about something you truly care about, the words come easily. Also, I would advise anyone who wants to start a blog to try not to take negative comments personally.  I know, it’s easier said than done, but the worst thing you can do is stop writing because you don’t want to offend anyone.  If something is in your heart, write about it and don’t worry about what people will think. That’s the beauty of blogging… it’s your opinion!
Posted by Monika at 8:00 AM 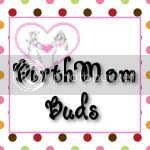